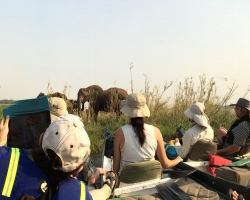 Lake Kariba is amongst the largest man-made lakes in the world and the second largest in Africa. The shoreline is over 2,000 kilometres long. Kariba is home to numerous species of flora and fauna and is an exciting and unique safari destination. The Matusadonha National Park is located on the shores of Lake Kariba. This park boasts some of the best walking areas in Southern Africa and with very good chances of tracking elephants, lion and the endangered Black Rhino. Spending a lot of time on foot, guests have the opportunity of enjoying this highly thrilling experience of tracking wildlife in an area with the Big Five. On our Tented Adventures along the shores of Lake Kariba we have a boat in order to be able to enjoy wildlife coming to drink surrounded by dead trees that stand like friendly ghosts characterising the Matusadonha shoreline scenery.

Tiger fishing on Lake Kariba is a popular sport and the lake is host to the world famous Tiger Fishing Tournament, a battle to catch the largest fresh water fighting fish in the world.

On Lake Kariba the Zambezi River was initially dammed so as to build a hydroelectricity generation utility for the benefit of both Zimbabwe and Zambia. The dam wall with 6 floodgates was built between 1955 and 1959 and is 128 metres high and 617 metres wide. The lake is 282 kilometres long at full level and 32 kilometres across at it’s widest point, 116 metres deep and covers an area of 5 180 square kilometres of what once was the Gwembe trough. The weight of the water totals 177 million tons and were all 6 floodgates opened, over 91 500 cubic metres (300 000 cubic feet) of water would surge into the river below each second! 86 men perished during construction of the dam and a church has since been constructed as a memorial to them. The dam wall was designed by Andre Coyne, a Frenchman, and built by a constructor called Impresit from Italy.

There are many stories that are put forward to explain the name Kariba. Some elders in the area note that close to the dam wall lies a rock that resembles a traditional stone trap, riva, hence Kariva, later mispronounced by the Europeans as Kariba. The other version is that the rock was named “Kariva” due to the fact that when the river flooded, the Rock trapped water thereby making it difficult for the locals who often crossed the river to return to either side of the Zambezi.

With our wealth of experience with camps and lodges in the region, we are able to facilitate safaris into other parks and countries